Oldies but goodies #1 The Little Engine That Could!

Sorry I have been AWOL for a bit. The lazy, hazy days of summer are sometimes hectic and crazy aren't they? Still I am starting to feel the subtle change of the the seasons. The days are a bit shorter, the mornings a little cooler and we know there isn't much  time left to enjoy the summer season. I will be sorry to see summer go, but I do love the fall too

I am at the shore this week. I am staying through the Labor Day holiday. I am welcoming a slower pace down here. But once everyone descends upon this sleepy little beach town, the house will be full of energy, laughter, and dirty towels! I don't think any house is ever big enough for big groups of overnight guests. Still my boys always say that those are the favorite times, when everyone is packed in together, sleeping on sofas and on the floor in sleeping bags ( kids, not adults!!). Times like this are especially challenging when one is trying to adhere to a different way of eating. It's like walking through a field full of land mines. There are always lots of things around that normally wouldn't be, and lots of times that my will power is tested.

Last week was a busy one and I celebrated my birthday, pretty much all week with get togethers with family and friends, and dinners out almost every night. So that gasp I let out when I got on the scale this morning was actually not a big surprise. I am feeling that some of you are going through this as well from what I am reading on the blogs and the facebook page. Because of this, I wanted to copy some of my older posts this week while I am getting that last little bit of summer relaxation. I need continual motivation, and I know many of you do too.

So, during this last week of summer vacation, I will  repost some of the oldies but goodies, in my opinion. Hopefully I will get the motivation I need, and maybe you will too!! Sending love and hugs from me to you!!


THIS IS AN OLDER POST I WROTE LAST SUMMER. STILL RELEVANT TODAY!! XO

I was sitting on the beach yesterday when I read Rosalie's post. What a wonderful accomplishment to meet her goal. Then this morning I logged onto blogger and was going through my dashboard, and saw post after post of good news from all of you. I really felt motivated reading everyone's blogs. All so different, but so much good advice. Everyone on a different path of the journey, but all heading towards the same goal of weight loss and better health.

For some reason while thinking over all that I had read, I thought of a book that I loved reading when I was little, and loved reading to my kids. It's called The Little Engine That Could, by Watty Piper.

Here is a quick version I took from Wikipedia in case you don't know the story.

A little railroad engine was employed about a station yard for such work as it was built for, pulling a few cars on and off the switches. One morning it was waiting for the next call when a long train of freight-cars asked a large engine in the roundhouse to take it over the hill "I can't; that is too much a pull for me," said the great engine built for hard work. Then the train asked another engine, and another, only to hear excuses and be refused. In desperation, the train asked the little switch engine to draw it up the grade and down on the other side. "I think I can," puffed the little locomotive, and put itself in front of the great heavy train. As it went on the little engine kept bravely puffing faster and faster, "I think I can, I think I can, I think I can."
As it neared the top of the grade, which had so discouraged the larger engines, it went more slowly. However, it still kept saying, "I--think--I--can, I--think--I--can." It reached the top by drawing on bravery and then went on down the grade, congratulating itself by saying, "I thought I could, I thought I could."

I thought of this book because I have often doubted, and sometimes still do, whether I can reach my goal. I know we all have. It's part of the journey. But all those that did reach their goal, just kept trying and trying, like the little engine, trying to pull that train uphill when it was never sure it could.  It started slowly, but gained momentum and accomplished what it set out to do.

While looking at all of the success I see, and evaluating why I'm the slow loser, I had to ask myself, am I trying as hard as I could? Yes, on most days, but no, on the weekends. For some people like me, that may be the reason their loss is slower. It can also be genetic, hormonal, thryoid disorder or whatever. But it could also be adherence to the plan or lack of it. When coupled with the other issues beyond our control, it can lead to a slower loss. That's where I'm finding myself these days.


But today I woke up, put on a pair of shorts that were tight in the beginning of the summer and they zipped right up. So there are other ways to measure progress too, even when the scale is inching down ever so slowly. Also another measure of success for me is not having those crazy sugar cravings, or constant feelings of needing to eat something. I am convinced those were swings in my blood sugar that caused those feelings. I really feel so much more control now that sugar is pretty much out of my life.

So I am keeping my goal of climbing up that mountain, just like the Little Engine. It's so nice that I have all of you who have made it over the top or are almost there to guide me along. I think of you often when my motivation is waning. For you it happened. I think I can, turned into I know I can,and it happened. The train reached it's goal. It didn't know it could, but that little train tried and tried, and it did. Just like you! 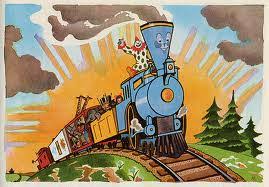 Welcome every morning with a smile. Look on the new day as another special gift from your Creator, another golden opportunity to complete what you were unable to finish yesterday. Be a self-starter. Let your first hour set the theme of success and positive action that is certain to echo through your entire day. Today will never happen again. Don't waste it with a false start or no start at all. You were not born to fail.

Pattie
I am a wife, mother, daughter, sister, friend, sometimes dissatisfied, always inquiring, food loving, wine drinking, animal adoring, passionate, funny, tired, loyal, woman, who loves to laugh, hang out with friends, smell flowers, be near the water, watch funny movies, play silly games, sing into wooden spoons, throw parties, hang out with my husband, be with my kids, go out to eat, try different wines, travel, shop, decorate, read, light candles, stare at the ocean, rip through magazines and try to extract the most out of life.